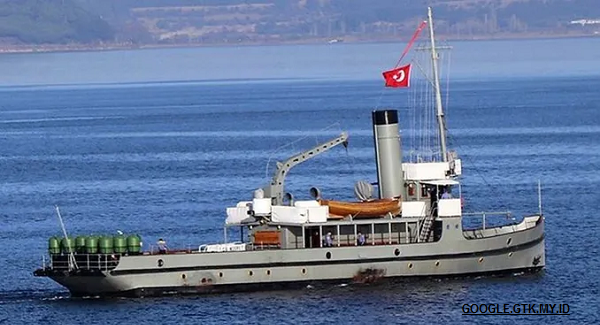 The TCG Nusret museum ship, a replica of the Nusret minelayer, was opened to visitors aboard Istanbul Sarayburnu, after port visits on the Marmara and Aegean coasts. As planned on May 18-19, TCG Nusret aborde to Istanbul Sarayburnu port was opened to public visits. The ship will be open to the public between 10.00-12.00 and 14.00-16.00. During the visit, the staff will reinforce the historical role of the ship with visual materials and introduce it to the visitors.

Nusret is a minelayer that had a great success in the First World War Çanakkale Naval Battles. Minesweeper ship that entered service in the Ottoman Navy and Turkish Naval Forces by the order of Malatya Arapgirli Cevat Pasha. Originally named Nusrat but used as Nusret in time, the ship was laid down in Kiel, Germany in 1911 and joined the Ottoman Navy in 1913.

In the spring of 1915, the Allied Navy, which had been bombing the bastions at the entrance of the Bosphorus for a long time and was certain that it would attack with reconnaissance flights and the activity of mine clearing ships, was now counting the days for the attack. Fortified Area Command decided to dump 26 mines into the Dark Harbor.

On the night of March 7 to March 8, the Nusret minelayer ship under the command of Captain Tophaneli İsmail Hakkı Bey and Fortified Mine Group Commander Captain Hafız Nazmi (Akpınar) Bey, regardless of the projectors of the enemy ships, left their mines at the Dark Harbor in Erenköy on the Anatolian side. The chief engineer of the ship is the front captain, Çarkçı Ali Yaşar (Denizalp) Efendi.

In the following days, the British made sea and air reconnaissance, but they could not find these mines.

The effects of the operation and what is said about it

The mines laid by Nusret changed the fate of the Çanakkale campaign on March 18, 1915, giving it the title of "the most famous minelayer in the world". kazanhad gone. The mines of Nusret had buried Bouvet with a crew of 639, followed by the battleships HMS Irresistible and HMS Ocean.

From the second volume of Ccolyen Corbet's “The Naval Campaign”: “It was not long before the true cause of the disasters was discovered and determined. The truth was that on the night of March 8, the Turks unwittingly laid 26 mines parallel to Erenköy Bay, and our reconnaissance ships did not come across them during their search. The Turks placed these mines on our maneuvering area for a special purpose, a dizzying victory despite all the caution we showed. kazanthey are.”

Naval Minister Winston Churchill commented on the event in the "Revue de Paris" magazine in 1930 as follows: "The main reason why so many people died in the First World War, the war cost heavy expenses, and so many trade and warships sank in the seas, was that night thrown by the Turks. Twenty-six iron vessels dangling from the end of a thin wire rope.”

The ship was purchased by private individuals in 1962 and served as a dry cargo ship under the name of Kaptan Nusret. It capsized off Mersin in 1990. Unearthed by a group of volunteers in 1999, Nusret was turned into a monument by Tarsus Municipality in 2003 with an environmental arrangement that included statues related to the Çanakkale Wars. TCG NUSRET, the exact size of the Nusret Mine Ship, built in 2011 at the Gölcük Shipyard Command, still serves as a museum in Çanakkale today. At the commemoration of the 100th anniversary of the Nusret Minelayer (8 March 2015), the ship was launched as a representative. The ship, which went to sea at 06:15 in the morning, left two representative mines in the sea at 100 meters intervals.